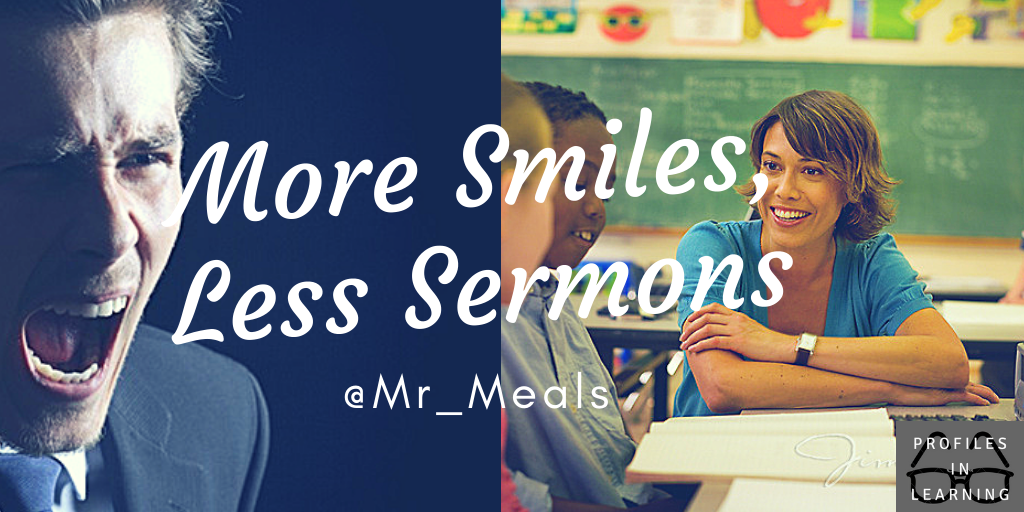 “The same thing can be said of much of the Bible: Its smiles carry more meaning than its sermons.” – Eugene Peterson, p. 96 A Long Obedience in the Same Direction

“Advice is like snow — the softer it falls, the longer it dwells upon, and the deeper it sinks into the mind.” – Samuel Taylor Coleridge

Below are two stories of teachers who influenced my life in the earliest stages of my youth. Both speak to the influence of our words and actions on the youngest before us. This is the first time I’ve transcribed these stories so I apologize if there seems to be rambling in their telling.

Two things finally forced the envelope to share these stories. First, teachers really do have an impact, no matter the stage in life. Secondly, WE ALL have influence on the lives of young people; therefore we must be intentional with our words and actions.

In simple, let’s let our smiles carry more meaning than our sermons. Enjoy!

As a Kindergartener and 1st Grader I was a hellion. I refused to sit still, wouldn’t stop messing with my classmates. Actually, as I reflect the only real memory I had from Kindergarten was sitting in the corner looking between the legs of the chair watching my other classmates. When I got to 1st grade I hadn’t improved much, if anything I had just gotten sneaky about my naughtiness.

Yet, even as a rambunctious, disrespectful 1st Grader I still thought about what I wanted to be when I grew up. I was either going to be a truck driver or an astronaut. At that time I was obsessed with everything space, my parents had gotten my brother and I a backyard telescope and I just loved it. (Mind you this was before 4th grade when I became a self-declared Civil War buff).

Our first-grade teacher had us do a simple assignment where we drew what job we wanted to be when we grew up, I drew being an astronaut of course! What happened next, I have full understanding was meant to be instructive as I have thought back later on the episode, and was most likely an outpouring of pent up frustration with me, she just wanted me to behave better.

Sometime the following week we watched a space shuttle documentary, I was surprised and interested, that was until the video showed a series of clips of space shuttle after space shuttle blowing up. Some just exploding on the platform others in mid-air. My teacher paused the video after the clips and said, “Sadly, astronauts do die…” She continued on commenting how astronauts were good students and I honestly cannot remember the rest because I just wanted to start crying. I left school that day and cried, my parents were confused, because I was adamant that I didn’t want to be an astronaut anymore.

My teacher got her desired result, I never misbehaved in her class again and I didn’t do much else either. I didn’t answer questions, didn’t play with my classmates, I just didn’t want to do anything. I became very quiet, shy almost because I was afraid something else would be taken from me just like my dream to be an astronaut. The rest of 1st grade was a blur, just staring at the clock and waiting for time to go by. When we moved to an entirely different state and different elementary school, I can’t say I was too upset.

It would take a few years before I felt comfortable speaking up in class or having confidence in who I was. I thank each and everyday my 4th Grade teacher Mrs. Graves, for kindling my fire to become a confident reader. I’ll never forget when she wouldn’t let me be removed from class for phonics practice, I had been receiving since 2nd grade and dreaded. She advocated for me when I needed it most, but she was also firm too.

I remember having a heated argument with a classmate about something with the living museum we were tasked in creating of a colonial town. Rather than yelling or berating us with a lecture, she swooped in with a big, warm smile, “I’m so excited to see you are both so passionate about these details for the doctors office. Why don’t we look it up and see which would be most realistic for the time period?”

Again, as I reflect back I sheepishly think to how annoying I must have been, but Mrs. Graves never let that on. During one of our tours of James Madison’s mansion, Montpelier, I didn’t leave her side asking questions and commenting about how beautiful the property was. All throughout she smiled, answering my compounding questions and when I said I wanted to buy the house she laughed, saying, “If anyone could do it, it would be you.” All I wanted was to be just like Mrs. Graves!

When I started bus driving, I never thought in my wildest dreams I would meet my Kindergarten and 1st grade-self, but I found that in one of the young men who rode my bus (God’s got a crazy sense of humor). As I think about situations that need to be addressed, I pause and smile thinking, “He will remember these interactions for the rest of his life…God, help me choose words and actions that will help and not harm. Build and not tear down.” I’m blessed to have had a model like Mrs. Graves to base my actions.

Pairing smiles with hard truths seems like an odd choice, but it is the difference between speaking from need versus speaking from abundance.

What I mean by “speaking from need”, is by choosing to get angry, impatient we begin to speak from our self-centered needs. Maybe it’s the need to feel in control or the need to protect our ego. Either way it is not helpful for the recipient of our feedback or ourselves. We may get the results we want, but the relationship is now damaged…nothing that is self-serving is worth that cost.

When we “speak from abundance”, we are choosing to engage in passionate patience with others, we allow our smiles to do as much of the talking as our words. I’ll be the first to admit, I’m not always good at this; yet I’ve come to realize the wisdom found in a smile. Smiles are not a sign of weakness, they are a manifestation of inner strength.

Therefore, let us go and allow our smiles to have more meaning than our sermons!

Thanks for reading and have a blessed Thanksgiving week!